skip to main | skip to sidebar

Take a "grand circle tour" around the back yard raised beds. There are four beds; two 3'x5' beds and two 5'x7' beds, arranged in a grid. I built the two 5'x7' beds to match the existing 3'x5' beds left from the previous owner. The newer beds are simply 2"x10" untreated doug fir. Each bed was (mostly) double dug in order to remove as many rocks as possible. The soil was sieved through 1/2" hardware cloth attached to a wood frame before over 2 yards of compost was added.
The whole area around the beds had been covered in weed fabric and pea gravel. The original smaller beds were placed directly on the weed fabric and filled with soil. When we bought the house one bed contained strawberries (quinalts) and the other weeds. I planted a few things last year in those two beds, but harvested little more than lettuce and radishes. When adding the larger beds, I moved the smaller beds in order to create ample access on all sides. Then I cut away the weed fabric and dug out the ground beneath each bed in the same manner as the larger beds.
Let's start with the bed in the northwest corner. Currently there are a few marigolds, a struggling little basil plant, a small zucchini plant, a large area of spinach, an 'early girl' tomato plant and a few tomatillos. The large rock and any stone you can see larger than the pea gravel came from digging out the bed beneath the weed cloth! 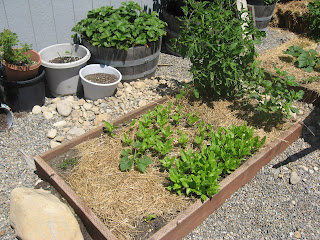 Our next stop is the northeast bed. More marigolds, another zucchini, four pepper plants (mixed hot varieties - three under jugs), and a Roma tomato with a couple walla walla onions around it. Between these two beds and the house are three barrels. Eventually they will hold blueberry bushes. Two of the bushes are setting on the barrels and are currently fruiting...but that's another post. Next is the southeast bed. From N to S are sweet potatoes, broccoli (I think...), salad blend lettuce and potatoes (unknown variety). I've hilled the potatoes twice already now and need to support them before I add a hefty layer of hay. 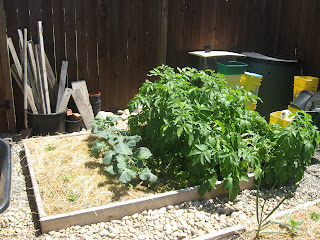 Our last stop is the southwesterly bed. Here are corn plants, carrots, a broccoli, cucumbers, walla walla onions, three cabbage plants (once more, I'm pretty sure...) another Roma and a Champion tomato. OH, and more marigolds. Once the marigolds are of good size, I may transplant them to other locations in each bed to spread them around. 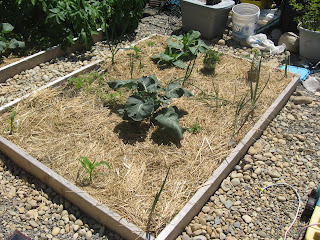 You'll note the beds are surrounded by pea gravel and other rocks from sieving out the soil. The frames are resting on the level of the weed cloth while the friable soil extends another 8-10 inches below. Digging rocks out of each of these beds was a major pain, but I hope it'll be worth it. The extra depth should allow me to space plants more closely and plant more intensively. It's only 100 square feet total area so I have to make the most of it.
I incorporated into each bed compost from the Corliss quarry next to the landfill on Meridian (for you local readers). They were generous in their lading and each yard was only $20. I had to make two trips but they let me get it in two half-loads. Sure, it's not 'cedar grove' like Ciscoe recommends, but the only place I could get cedar grove compost was farther away, charged by the half yard (almost twice as much), and was stingy in how much they gave me. Guess where I'll go next time I need compost?
So that's the state of the beds as of June 26th when I took these photos. We've been enjoying spinach and recently lettuce. Since these photos were taken I've received 8 additional corn starts, bringing my total up to 11 plants. I seeded over 30, planning to thin by half or so. Only three came up in our unusually wet, cold springtime. Hopefully we'll have an 'indian summer' and I can get some corn off these stalks!
Next time...fruits! 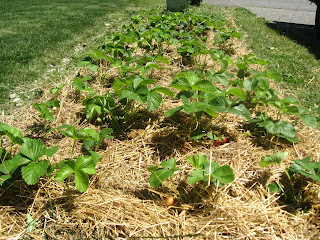 Strawberries along the driveway.
Welcome! This is the web log of Galen Gallimore & family. I created this blog as a place to keep track of all the gardening I do in order to easily share it with family and friends. While my family's interests are varied, this site will mostly focus on the state of the lawn and gardens.

If you'd like to see some of what I do with model trains, go to The Gauge and look for posts by ocalicreek.

If you'd like to learn more about my congregation, visit Bethany Lutheran Church.

You can also find me on Facebook, although I don't make as much use of it as some.

Comments are welcome, just be polite. Thanks for stopping by. I hope what you see here will inspire you to go and do likewise (or learn from my mistakes)!

Puyallup, Washington
Posted by Galen Gallimore at 2:29 PM No comments: